If your F150 isn’t giving you the smooth ride you want, it’s only normal to want to replace or upgrade your existing shocks and struts. They should be able to give you the comfort you deserve without having to worry about a coffee spill when your tire overtakes a pebble on the road.

A strut in an F150 is a shock/spring combined. The shocks are within the spring, so to speak. If you need to replace your rear shocks only, it’s going to be lighter on the wallet. If you need to replace your front struts, it’s best to swap out the whole spring and shock assembly but this will cost you more. The shock cartridge is more likely to go bad than the spring itself in the front.

Here are the Best Shocks and Struts for The F150:

Note The F150 has shocks in the rear and struts in the front, except for models earlier than 2004. 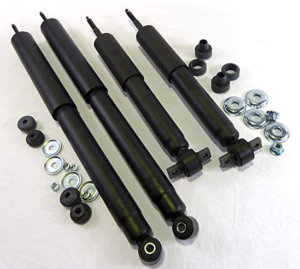 Drive techs full shock set for the F150 fits 2WD models only. This is an OEM replacement and features full welding instead of just a spot for a strong construction. The seal is teflon bonded for durability. It is backed by a limited 2 year 24000 mile warranty. These are a great value replacement if you have a truck that dates back this far and has yet to have it’s suspension replaced. Your ride quality will return to what it felt like when it was first driven off the lot, making your old dependable truck feel new again. 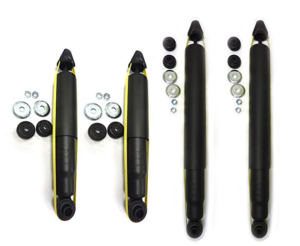 Drive tech  has a full shock set for your 1997-2003 4WD F150. This set also comes with a 2 year/24000 mile limited warranty. Like their 2WD kit, it’s a teflon bonded piston seal to keep your new kit durable for years to come. These are meant to breathe new life into old trucks with an easy bolt/swap installation. The piston is a smaller diameter than the OEM but for the price these can’t be beat. 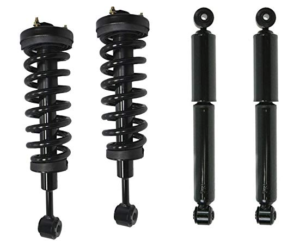 If you drive a F150 and you’re looking for a 4WD replacement assembly between 2004-2008, you can’t go wrong with this full set from Drive Tech America. The struts come fully loaded, so it’s an easy bolt on assembly for the front and rear. The struts are teflon banded on the piston seal and have a  polished chrome plated rod. The coil spring is heat treated and powder coated.  This is not a leveling unit, your factory ride height is going to be what you get when you swap these out. Enjoy a smoother ride than OEM shocks but with no change in lift. 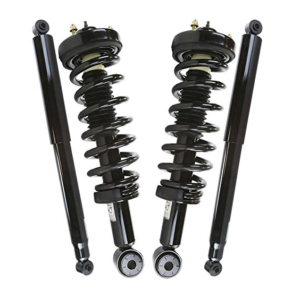 Prime Choice Auto Parts has a full kit swap for your 2WD. This is a bolt on easy swap unit for F150s between 2004-2008. It’s a sleek black that has been powder-coated. This is OEM replacement and is only for the two wheel drive version; these struts come charged with nitrogen gas. Your truck will feel like new again once you swap these with your old ones, customers are happy and report a smooth ride. 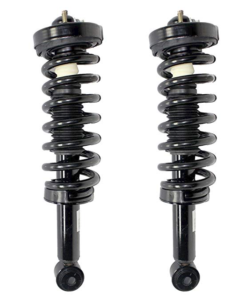 This assembly is for the F150 4WD from 2009-2013. It only includes the front struts, you will have to replace the rear shocks separately as there is not a full kit available for the entire assembly. We recommend getting the Monroe Shock Absorbers to complement these struts; they have a good reputation and are known as quality shocks among the auto community. 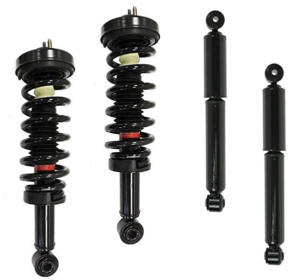 This DTA Full Set assembly is good for 2WD F150s between 2009-2013, installation is a simple bolt and swap. The struts have nitrogen gas and a teflon banded seal. It is a complete kit replacement for worn struts and shocks, not a leveling or lift kit. If you’re looking to replace your factory shocks for something similar, this is your best bet.

This guide has covered the vehicles most in need for shock and strut replacement- spanning from 1997 to 2013. All kits featured can be swapped with a simple bolt on and off, and do not require compression with a spring clamp. The installation procedure will vary depending on your truck year and drive. We’ve included both two wheel drive and four wheel drive and hope that you find the option to restore your ride to it’s former glory.

I'm the owner of Beast Auto. I live in Phoenix, Arizona and love taking road trips all across my beautiful state. 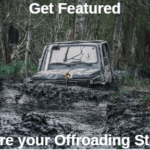