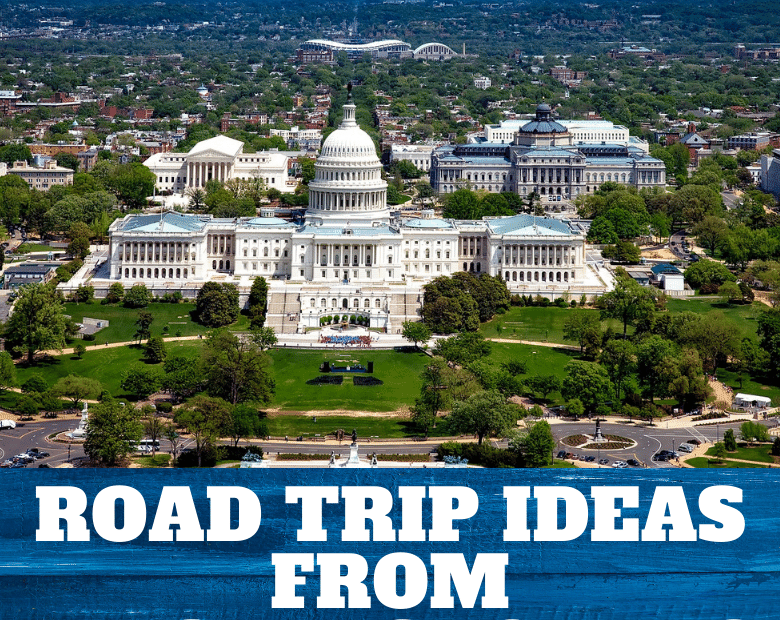 This post may contain affiliate links so we may receive compensation if you sign up for or purchase products linked to below. As an Amazon Associate, I can earn from qualifying purchases. Read our disclosure for more information. 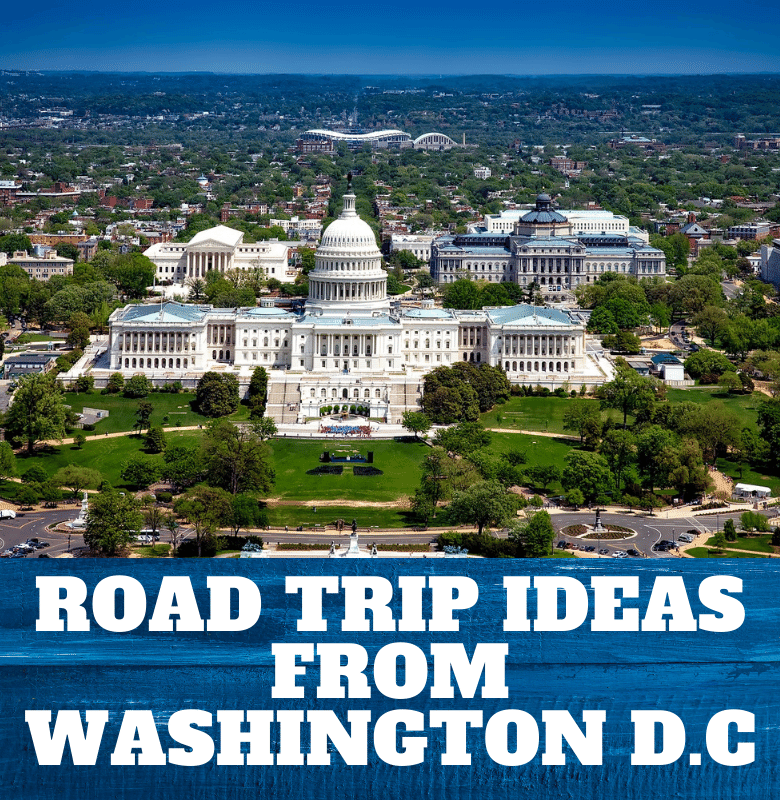 When you need a break from the pace of life in the District, whether for a day, a weekend, or longer, you can escape into the past, the mountains, or the beach. Once you escape the city’s traffic, that is.

Heading south out of DC takes you on a George Washington themed adventure. 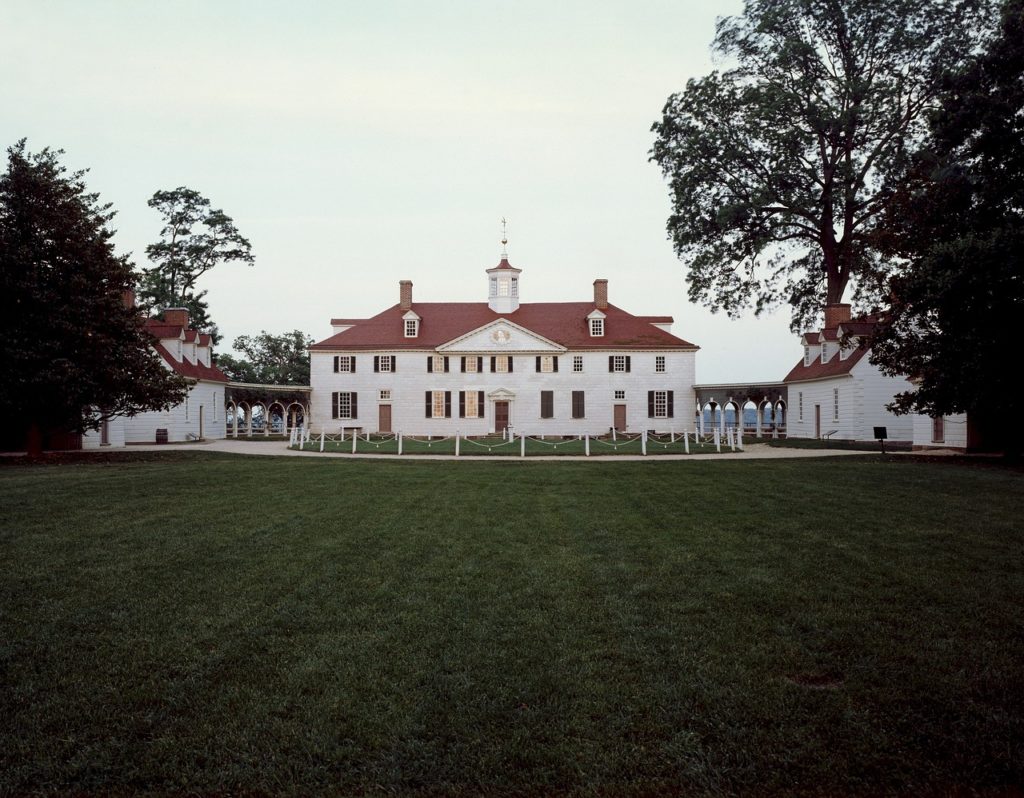 A quick 20-minute drive down the GW Parkway (or, you know, a lot longer at rush hour) will bring you to Old Town Alexandria. It’s unmistakably part of the DC metro area, but it’s also a small town oasis.

It’s consistently ranked among the country’s best small cities and the best cities in the South.

The heart of Alexandria is King Street, with architecture dating back to colonial days that today hosts hundreds of locally owned boutiques and shops.

Stroll the brick sidewalks with a coffee or a treat – Alexandria is known as the ice cream cone capital of the U.S. – between taking in its historical attractions. 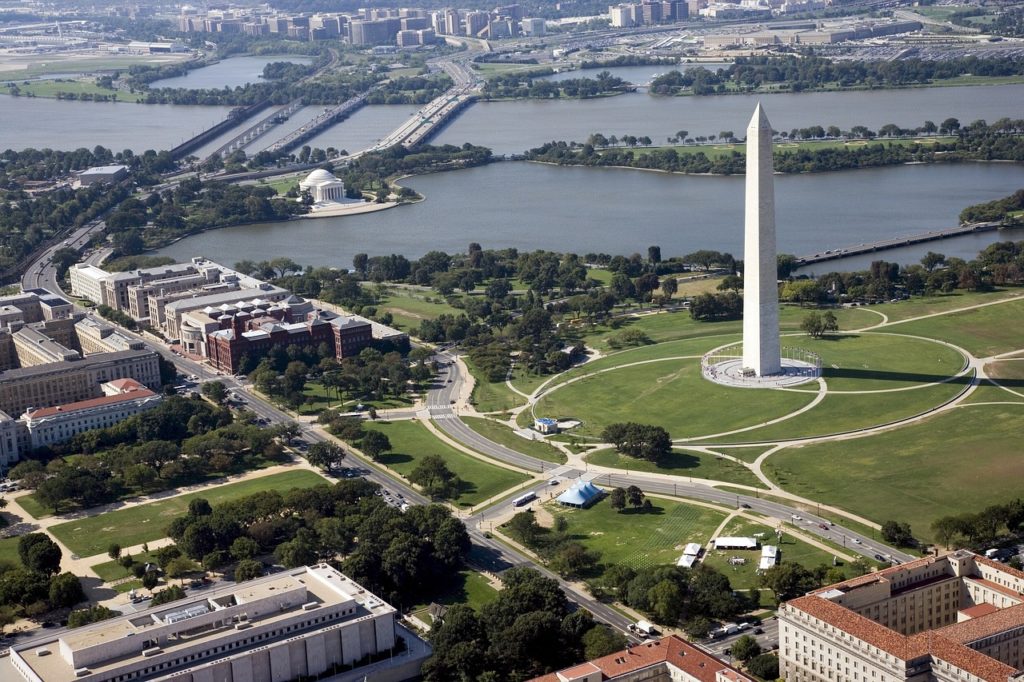 You can see all the way down King Street to the Potomac waterfront, which features the tall ship Providence, a replica of the Continental Navy’s first ship that’s open for tours.

Another 20 minutes on the Parkway takes you to George Washington’s Mount Vernon, the first president’s riverside mansion, with museums, tombs, gardens, and a working farm. On your way home, stop back in the Old Town for dinner and a lantern-lit graveyard tour. 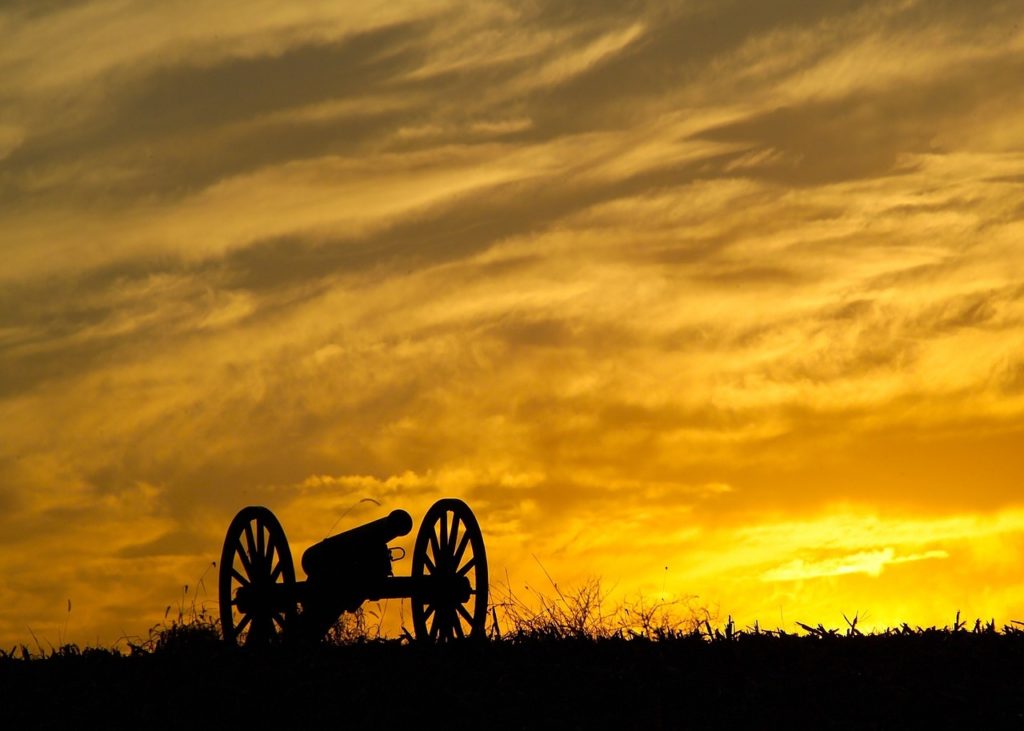 An hour south of DC along 95 is the quaint town of Fredericksburg. It was a key strategic location during the Civil War, with four major battles fought in the area. Fredericksburg and Spotsylvania Military Park offers a hub for exploring the battlefields and cemeteries in Spotsylvania County.

From there you can explore the nearby battlefields at Chancellorsville, the Wilderness, and the Spotsylvania County Courthouse.

The Rappahannock River runs through Fredericksburg. In addition to making it into a picturesque town today, the river divides Virginia roughly midway between Washington and Richmond, the Confederate capital.

Whichever army – the Army of the Potomac or the Army of Northern Virginia – controlled the ford held a critical advantage. The successful Confederate defense at Fredericksburg and Chancellorsville in 1863 paved the way for the invasion of the North and the battle of Gettysburg.

In 1864 the war again raged through the area as the Army of the Potomac pursued General Lee’s army toward Richmond. All four historic battlefields are easy to explore within 20 minutes’ drive of Fredericksburg. 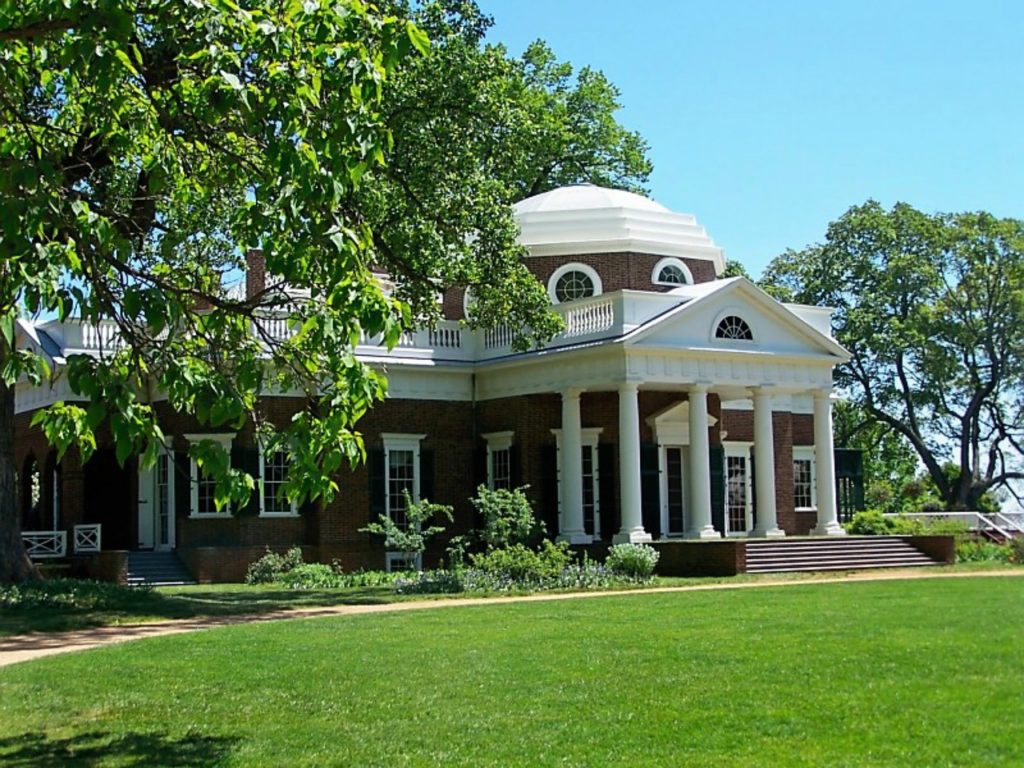 If you like the sound of spending a day with George Washington in Alexandria, you’ll love a weekend in Charlottesville with Thomas Jefferson.

Charlottesville is a college town about two hours southwest of DC. It’s the home of the University of Virginia, founded by Thomas Jefferson near his plantation, Monticello.

Charlottesville has all the quirky personality you expect from a college town. At the Downtown Mall you can shop and dine in the shadow of colonial red brick, walking distance from the University.

Charlottesville has a vibrant live music scene. Take in a show at the Paramount Theater, a local landmark since 1931.

Use Charlottesville as your base for exploring the area.

Monticello, similar to George Washington’s Mount Vernon, was Thomas Jefferson’s mansion and plantation that has since been turned into a museum and educational institution.

In 1987 Monticello, together with part of the original University of Virginia, was named a UNESCO World Heritage Site.

If you want to see it in style, Monticello Wine & Coach Co. offers VIP after-hours tours for groups of five or more, complete with pickup and dropoff in town.

When you’re done in Charlottesville, don’t just head back to DC the way you came.

Instead, head west toward Waynesboro and enter Skyline Drive at Rockfish Gap. Skyline Drive follows the crest of the Blue Ridge Mountains north for 105 miles in Shenandoah National Park to Front Royal. From there you can take I-66 back to DC.

It’s one of the most scenic drives in the country, and with its 35 MPH speed limit, even the driver can enjoy the view–while watching out for wildlife.

Skyline Drive is well signed and offers access to the all hiking, camping, and other outdoor recreation available in Shenandoah National Park.

Gettysburg Pennsylvania, where the deadliest and most famous battle of the Civil War occurred in 1863, is just an hour and a half from DC. It’s a must-visit for anyone with even passing interest in American history.

Start your visit to Gettysburg at the National Military Park Museum and Visitor Center, then explore the battlefield and town from there. Download the Gettysburg app for a guided driving tour of the park’s nearly 4,000 acres to really feel a connection to the three days of battle.

Beyond the battlefield itself, don’t miss the Gettysburg National Cemetery, where some 3,500 Union soldiers were laid to rest.

It was at the cemetery’s dedication that Abraham Lincoln gave the famous Gettysburg Address. Lincoln’s eulogist in 1865 said, “the battle itself was less important than the speech.” Tour the battlefield and the cemetery together and judge for yourself.

When you’ve had your fill of civic and military history, downshift the intensity of your weekend getaway by heading an hour northeast to Hershey, PA.

Hershey is a company town, and its main draw is the ever-growing Hersheypark, featuring a theme park packed with roller coasters, a water park, zoo, and resort. It’s like Disneyland with a sweet tooth.

There’s something for everybody, from Hershey’s Chocolate World where the kids can tour the candy making process and design their own candy bar, to the see-it-to-believe-it Hotel Hershey resort.

The resort has a spa offering treatments like a Chocolate Fondue Wrap or Whipped Cocoa Bath, it offers expert falconry demonstrations, and it has a ballroom that hosts a New Year’s Eve party every Saturday night. Only one of those is made up based on a gag from the Simpsons. 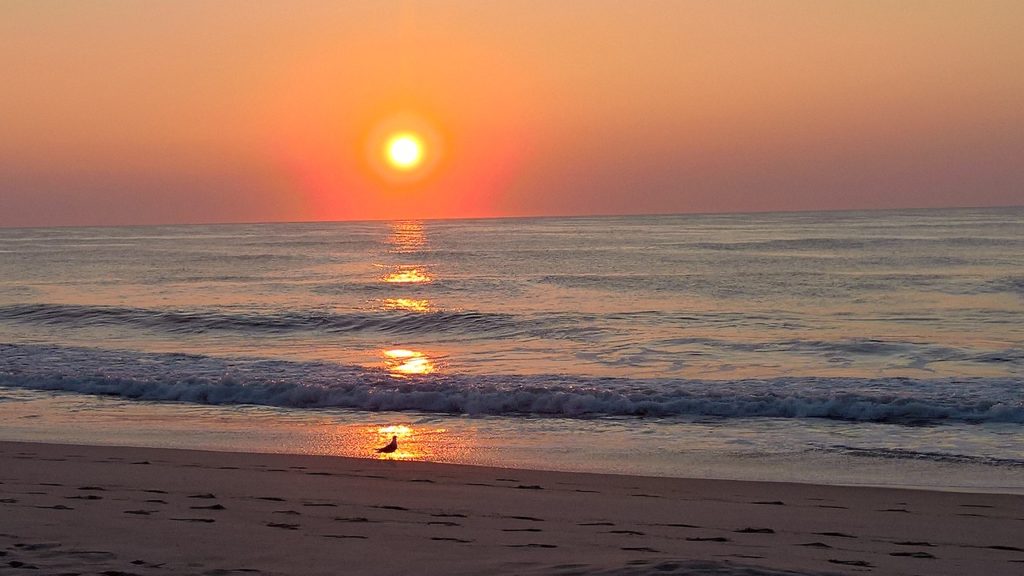 Who doesn’t enjoy a good beach vacation? Maryland’s eastern shore, about three hours from DC, is a great beach destination, and Ocean City is sort of its capital. Its three-mile-long boardwalk is packed with attractions like Ripley’s Believe It or Not! and the inevitable ferris wheel, as well as shops and eateries.

Break up the relaxing beach days with a quick drive down to Assateague Island National Seashore, beloved for its natural beauty and its herds of wild horses, supposedly descendants from survivors of a Spanish shipwreck.

The park is on the western side of the Delmarva Peninsula, so you can make an excursion from Ocean City (maybe something to do on a rainy day) or stop there on your way to or from the bridge.

The Chesapeake Bay Bridge between Annapolis and the peninsula is one of the highlights of the trip–no pun intended. At 350 feet above the bay’s surface and often cited among the country’s scariest bridges, it’s a thrilling drive.

It has been closed as a precaution a handful of times during hurricanes and other storms that caused high winds.

Annapolis, just on the DC side of the bridge, is also worth a stop. Its Historic District is both quaint and, well, historic; Annapolis was the original capital of the U.S. The Maryland Statehouse is the former capital building where the Continental Congress met as the Revolutionary War was concluding.

The Banneker-Douglass Museum, Maryland’s official state collection of African-American history, is a worthy companion to the Harriet Tubman Park. And of course Annapolis is home to the U.S. Naval Academy, whose Museum commemorates American naval history, featuring a model ship hall with reproductions dating as far back as 1650.

For a more unique and off-the-grid beach vacation, make the five-plus hour drive to the Outer Banks of North Carolina.

The Outer Banks are a series of barrier islands in the Atlantic, and the farther south you go, the more remote. 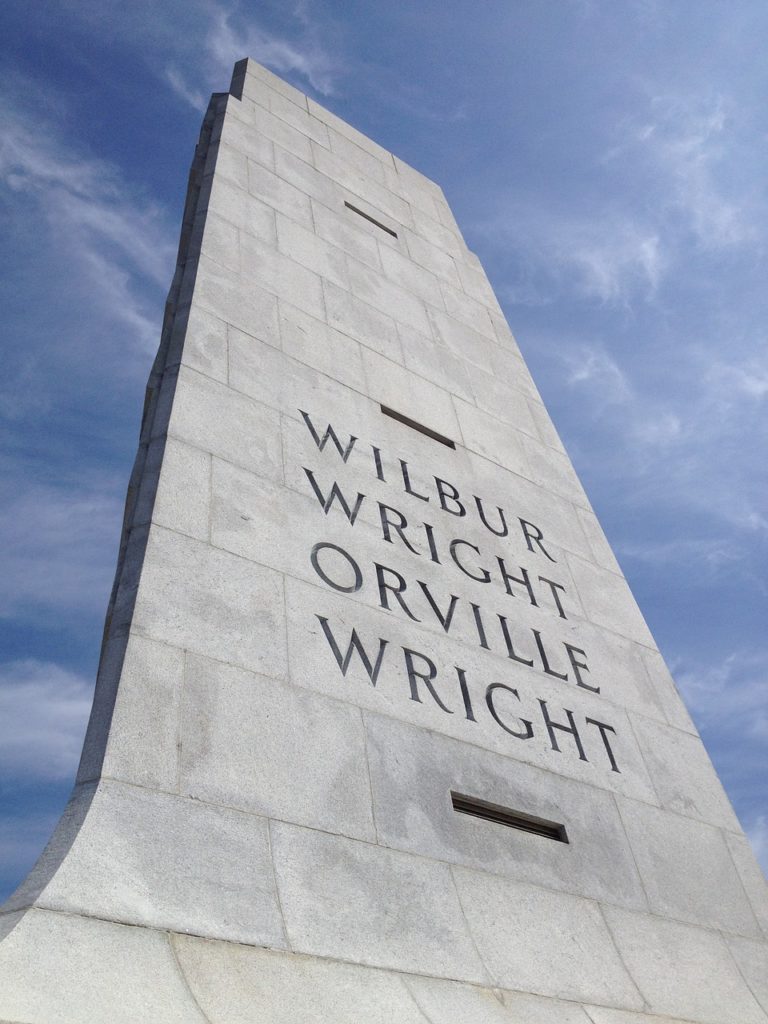 Kitty Hawk is the busiest and most developed area – and also the closest. It offers plenty of places to stay and things to do.

It’s worth a visit to the Wright Brothers National Memorial, dedicated to the first successful airplane flights that took place there in the early 1900s.

Wherever you choose to stay in the Outer Banks, your best bet is to rent a beach house. If you can visit outside the peak summer months you’ll find much lower rates, and the beaches are great from early summer into the fall. Don’t forget that these are islands: they have beaches on both the Atlantic and sound sides, and they’re different but both beautiful.

Your drive to the Outer Banks will pass through Richmond and Norfolk, and both cities offer destinations worth stopping for. The Virginia Museum of Fine Arts in Richmond sports a global art collection far beyond what you would expect for a city of its size.

Richmond’s historic district features antebellum homes dating from as far back as 1737, the oldest of which houses the Edgar Allan Poe museum, who lived in Richmond for part of his life. Norfolk is home to the largest naval base in the world, so fittingly its best attractions are on the waterfront.

You can tour the USS Wisconsin, one of the largest U.S. battleships ever built, or take a cruise on the American Rover, a three-masted schooner that sails the harbor and the Elizabeth River. 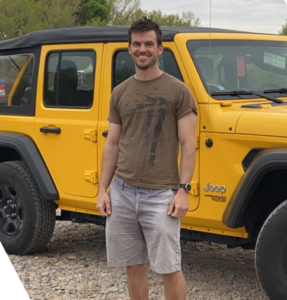 My name is Conor and this site seeks to give buyers a rundown about automotive products and news with informed reviews. We hope you enjoy the site!

This site also has other links to affiliate programs and links to other sites for informational purposes occasionally.